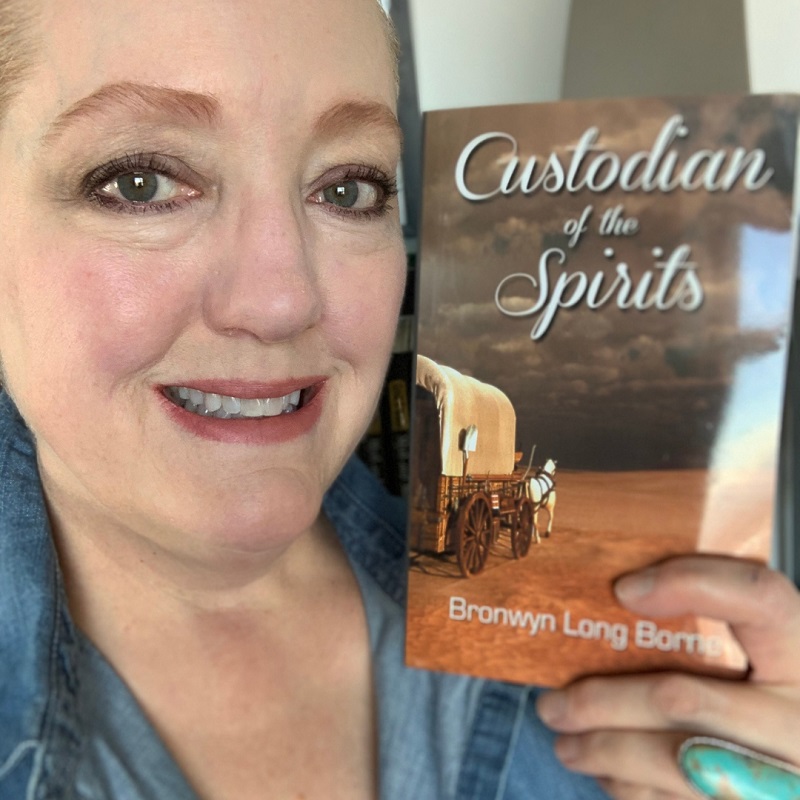 Bronwyn Long Borne, is a nurse by day and writer by night. She wrote a wine blog for three years, and is published in academic journals. Her self-published sci-fi/fantasy series The Shalemar Trilogy, written under the pen name Rohret Buchner, incorporates historical fiction, political intrigue, epic fantasy, and romance. Custodian of the Spirits is the first book in The Valley of Heart’s Delight Series, a family saga set in California’s Santa Clara Valley. 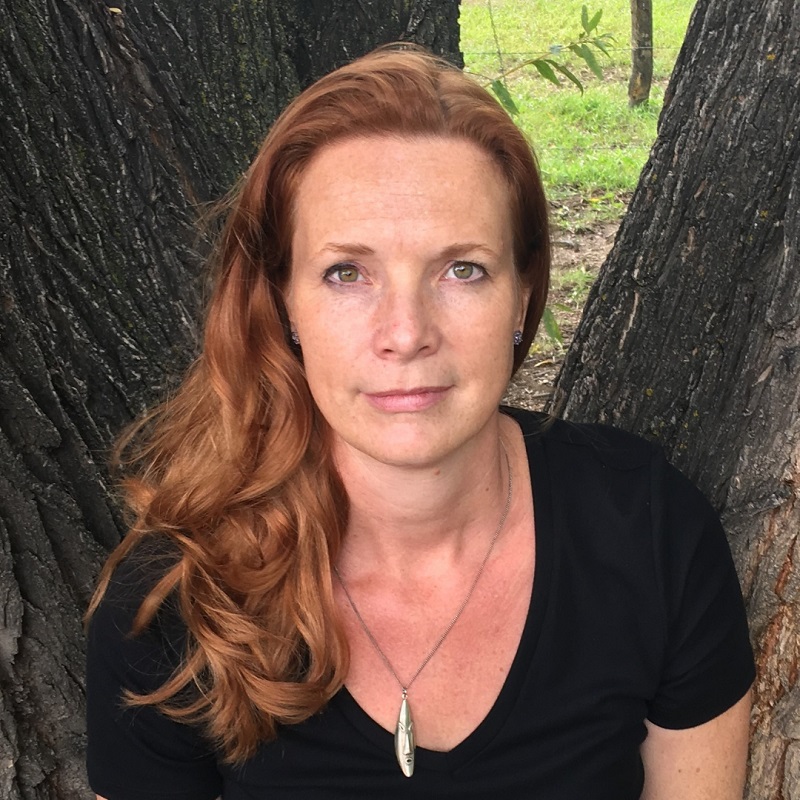 Fleur Bradley is the author of the Double Vision trilogy. She’s passionate about two things: mysteries and getting kids to read. Fleur regularly does school visits and speaks at librarian and educator conferences on reaching reluctant readers. Originally from the Netherlands, Fleur now lives in Colorado Springs. 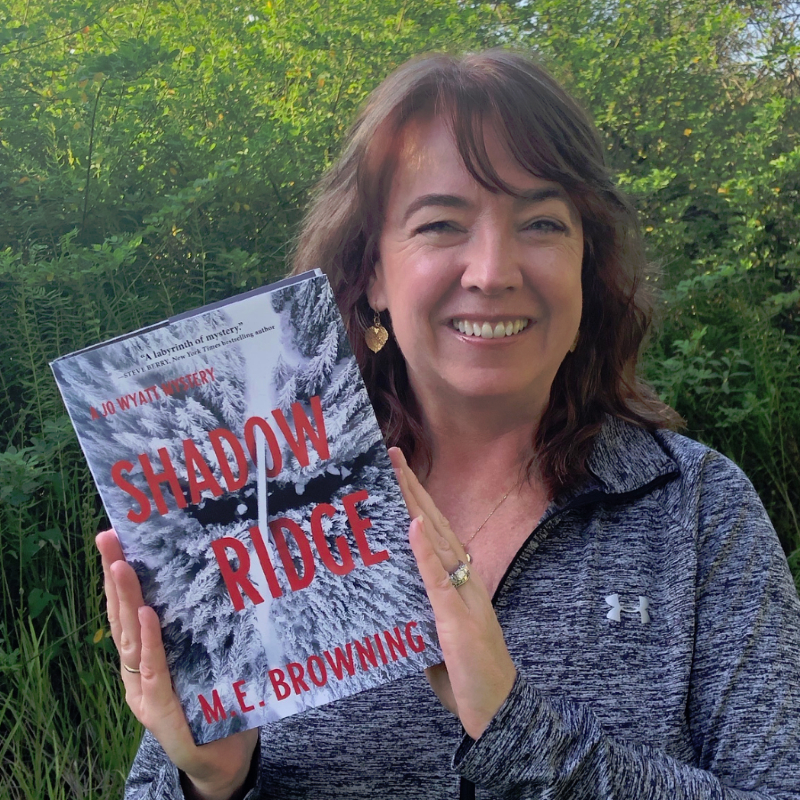 M.E. Browning served 22 years in law enforcement and retired as a captain before turning to a life of crime fiction. Writing as Micki Browning, she penned the Agatha-nominated and award-winning Mer Cavallo mysteries, and her short stories and nonfiction have appeared in anthologies, magazines, and textbooks. Writing as M.E. Browning, Shadow Ridge begins a new series of Jo Wyatt mysteries. 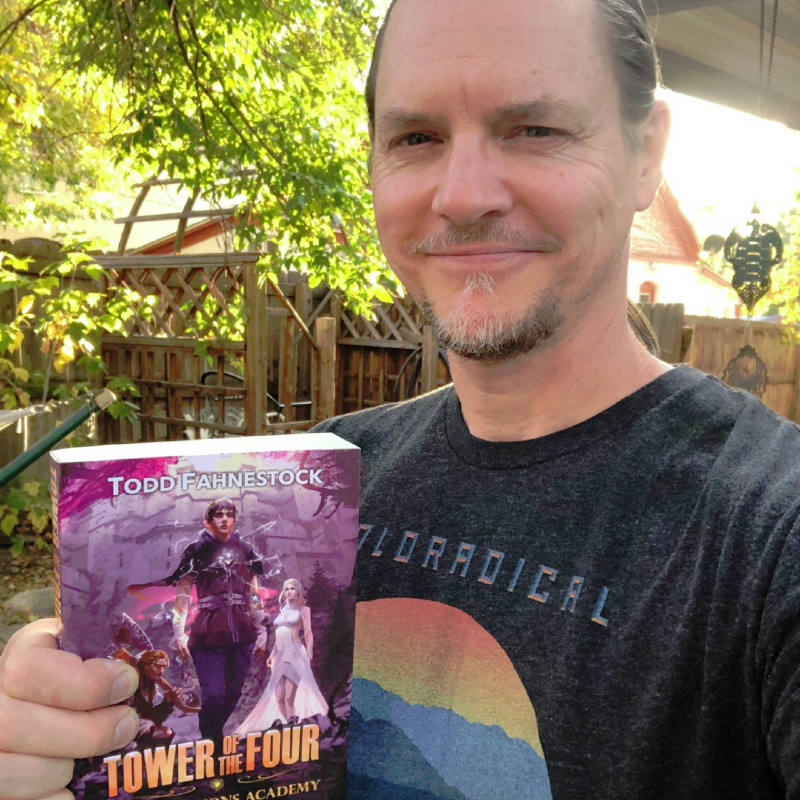 Todd Fahnestock is a writer of fantasy for all ages and winner of the New York Public Library’s Books for the Teen Age Award. Tower of the Four, Threadweavers, and The Whisper Prince trilogy are three of his bestselling epic fantasy series. He was a finalist in the Colorado Authors League Writing Awards for the past two years for Charlie Fiction and The Undying Man. 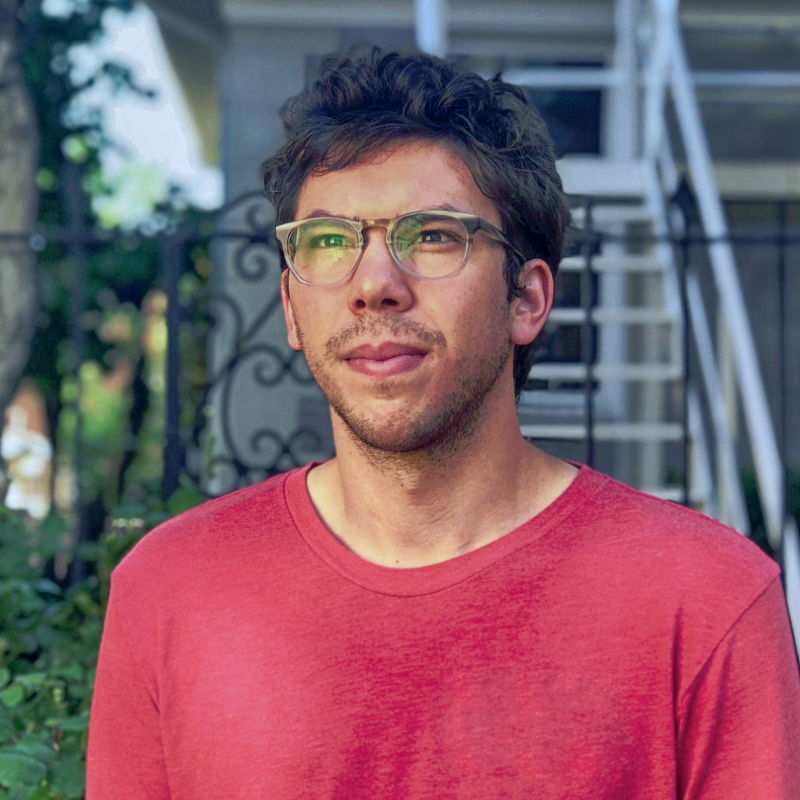 Dylan Fisher‘s first book, The Loneliest Band in France, was the Winner of Texas Review Press’s 2019 Clay Reynolds Novella Prize and selected as a 2020 Coups de Cœur by The American Library in Paris. He holds an MFA in Creative Writing from the University of Nevada, Las Vegas. Dylan recently relocated from Denver to Atlanta to begin a PhD in Creative Writing at Georgia State University. He is currently drafting two novels, one of which is a sort of sequel to his first, and he has a third in the planning stages. 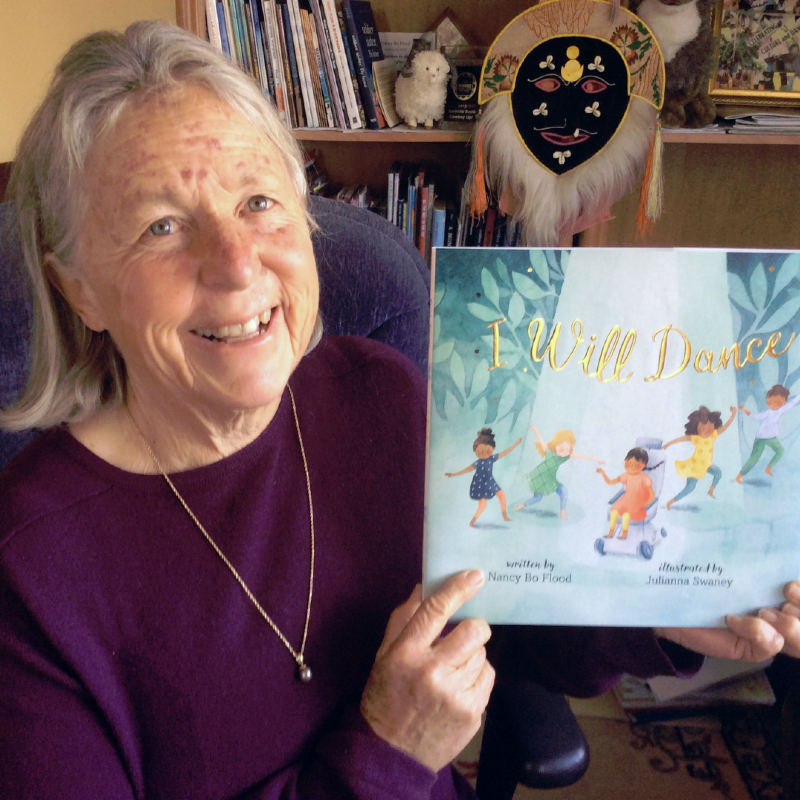 Research psychologist Nancy Bo Flood studied brain development at the University of Minnesota, and as a post-doctoral scientist at the University of London. She has conducted workshops on child abuse, learning disabilities, play therapy, and creative writing. Her writings have been named Arizona Book of the Year; Colorado Book of the Year; Top 100 Books of the Year, Bank Street; and Junior Library Guild Selection. She has a particular interest in legends and folklore, and the power of story to build compassion and bridge understanding among people, and is the author of several books, including Warriors in the Crossfire and Soldier Sister, Fly Home. 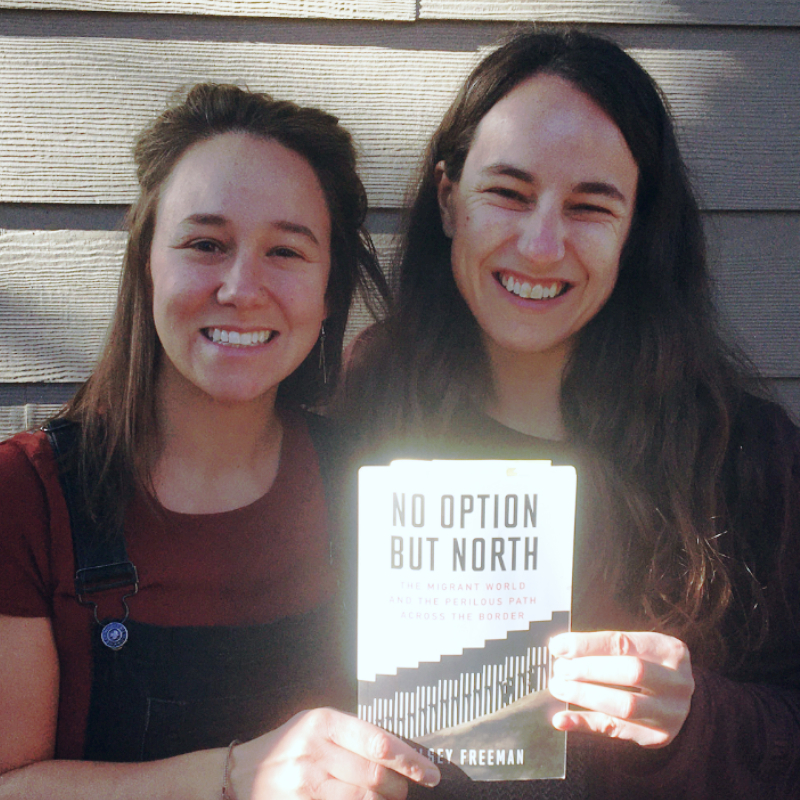 Tess Freeman is a freelance photographer and videographer with a passion for human interest stories, which led her to Mexico to shoot photos for No Option but North. She studied journalism at the University of Oregon focusing on photography, video and multimedia storytelling. She has worked as a multimedia journalist for The Bulletin, staff photographer at The Coeur d’Alene Press, and a photographer for Rustic Pathways. 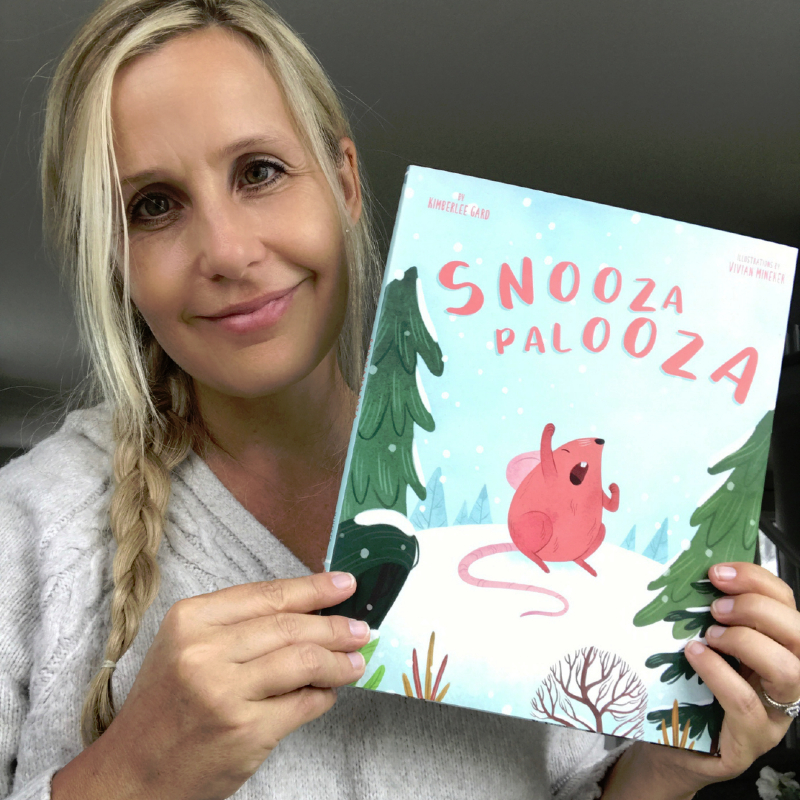 Kimberlee Gard spent most of her childhood running from reading, until a loving teacher taught her the tools to overcome her learning disorder, and showed her the magical world of books. From this came Kimberlee’s aspiration to write children’s books that would foster that same love of reading in others. Watching her own son battle dyslexia further inspired her to create stories that would encourage and engage even the most struggling and reluctant reader. Kimberlee and her family live on a small farm in Colorado with a gaggle of barnyard friends that offer constant inspiration for the stories she writes. 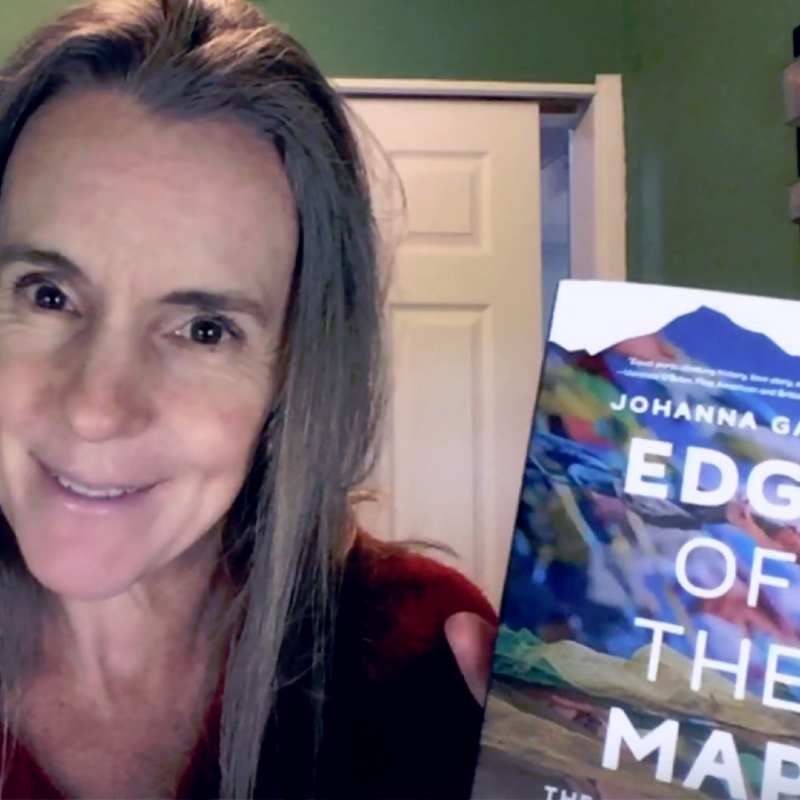 Johanna Garton is a mother, writer, and cross country coach. She has dabbled in nonprofit
consulting, college teaching and a brief, but quickly extinguished career as a lawyer. Johanna’s mother, also a journalist, devoted ten-years to researching Christine Boskoff’s story. Johanna continued the research, conducting more than 75 interviews, to finish Edge of the Map. She and her husband share their home in Denver with two bright children who are much wiser than she is and the inspiration of her storytelling. 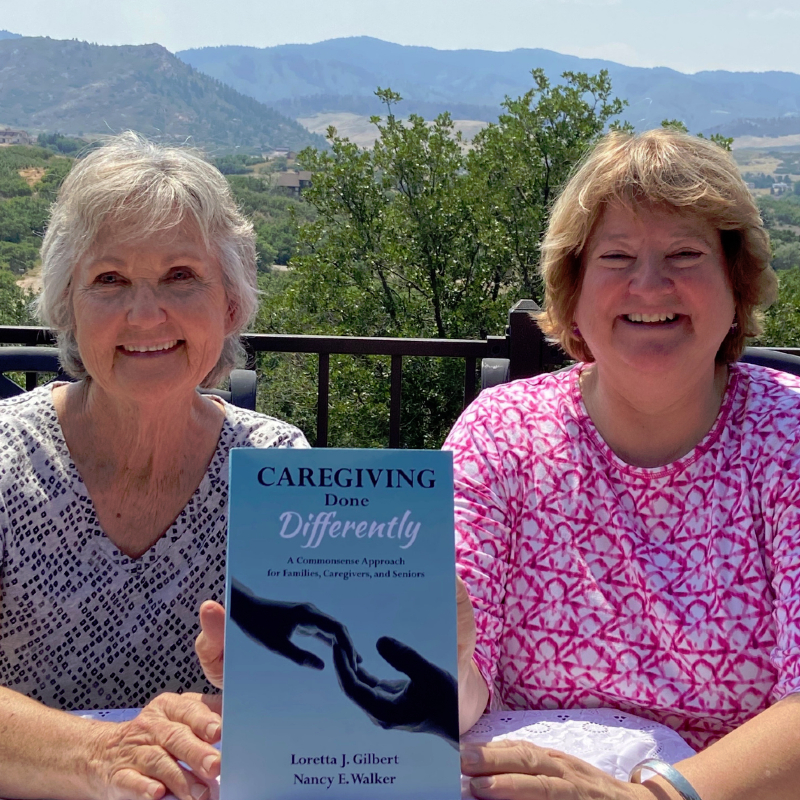 Loretta Gilbert owned and operated a small assisted living residence in Colorado. She was on the Colorado Department of Health Assisted Living Advisory Committee and served as president of the Colorado Assisted Living Association. Growing up on the Wind River Reservation gave her an expansive understanding of the circle of life. Loretta’s commonsense approach to caregiving and helping seniors and families emerged from her unique life experiences. She lives in Colorado with her husband and much loved animals. 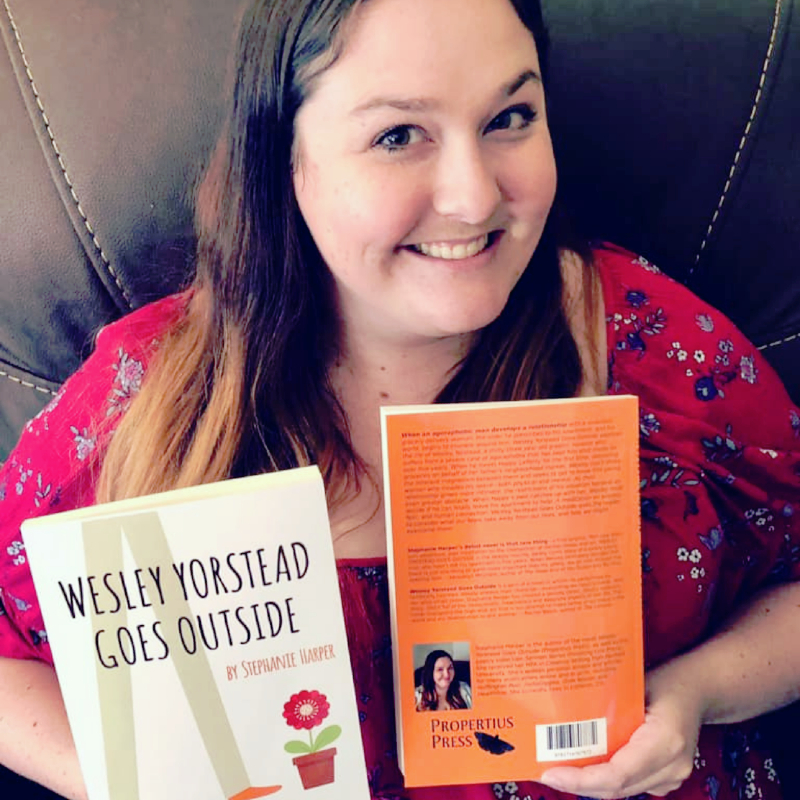 Stephanie Harper received a BA in English from CU Boulder, and her MFA in Creative Writing from Fairfield University. Her narrative nonfiction work can be found in a number of publications both in print and online. She often writes about chronic illness and spirituality. Stephanie is passionate about helping other writers and has served as tutor, writing coach, and developmental editor on a number of projects. She’s always open to new projects and collaborations. Stephanie and her family live in Littleton, CO. 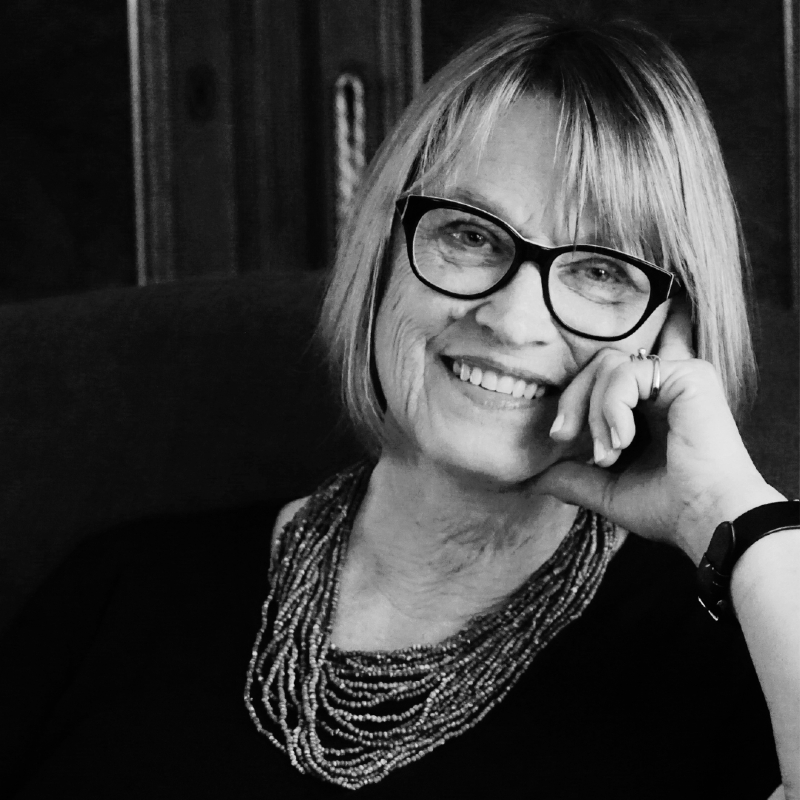 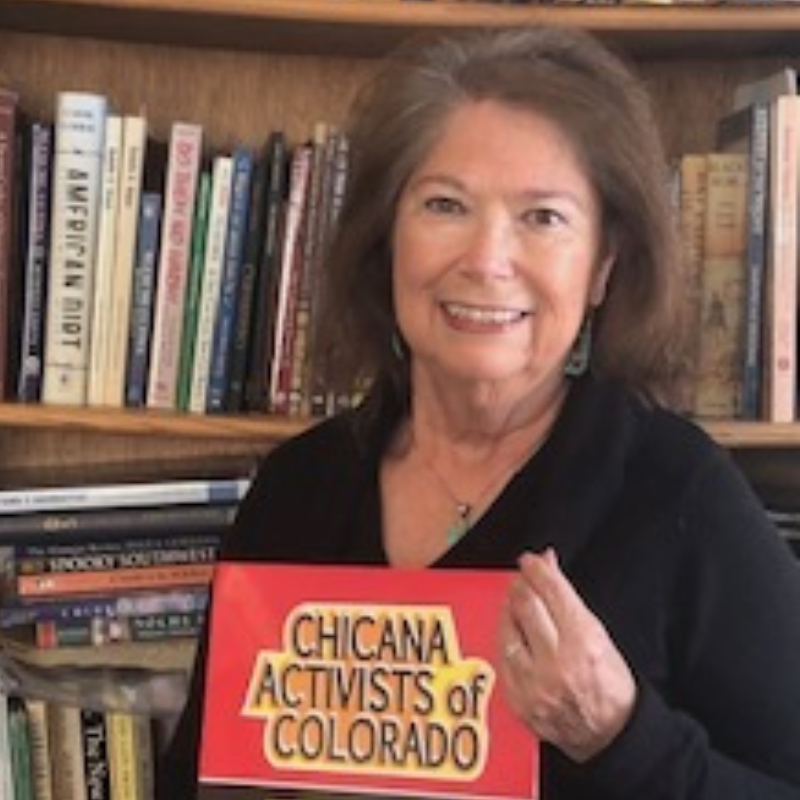 Deborah Martinez Martinez earned a Ph.D. in educational leadership in 2001
while serving the community. After 18 years at Colorado State University
at Pueblo, she was an historical interpreter at El Pueblo History Museum,
conducting natural dye workshops throughout Colorado and New Mexico.
She and her partner, Robert Pacheco, have published 11 books including
Trade on the Taos Mountain Trail, a Colorado Book Awards finalist. 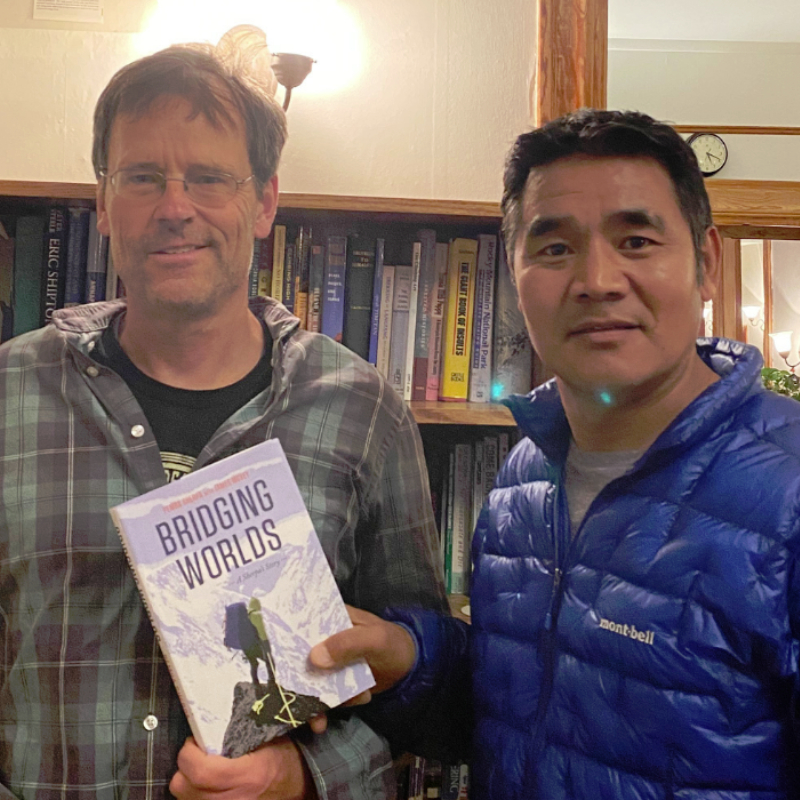 James McVey has worked as an outdoor journalist, wildlife biologist, musician, and university professor. He has traveled widely and written about such places as the Nepal, Patagonia, and the coral reefs of Cuba. His short stories and essays have appeared in literary journals around the world. He has read his work at the Sorbonne in Paris and was the featured American author at the Watermark Literary Muster in Australia. James lives in Eldora, Colorado where he operates Victory Gardens, a nonprofit organization dedicated to developing local food systems. 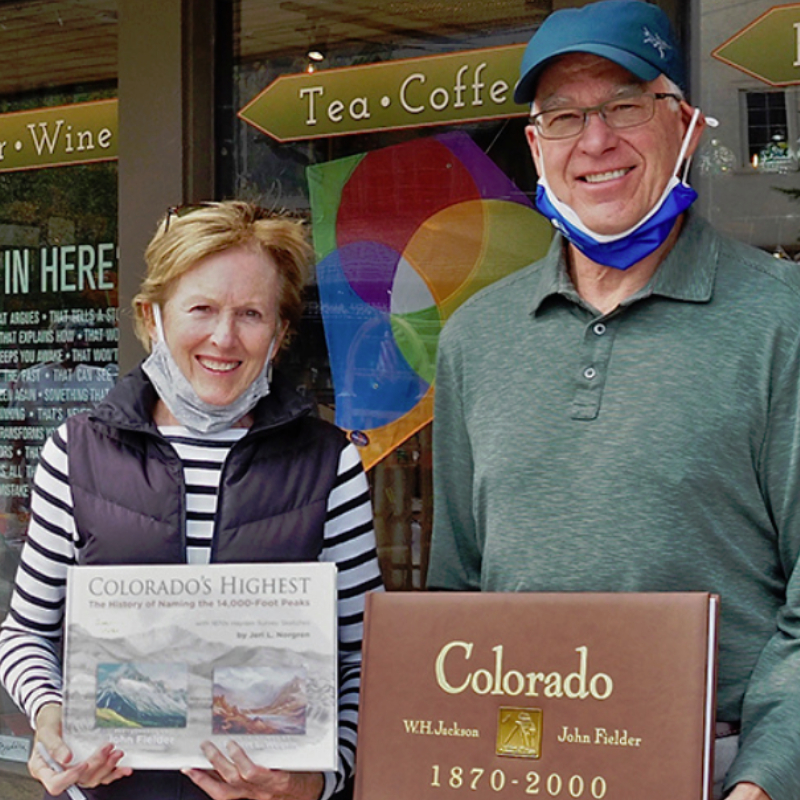 Jeri Norgren has spent most of her life exploring the mountains and all the wonders they hold. As a member of the Denver Fortnightly Club, she has authored numerous papers on a variety of topics. Club minutes from 1895 detailing the passage of a motion to rename Mt. Evans inspired her fascination with the nomenclature of Colorado’s highest peaks. Jeri is a nature-lover who lives on a historic Englewood, Colorado farm where dogs, coyotes and a pair of great horned owls keep her company.

Pemba Sherpa grew up in one of the poorest regions of Nepal. At 16 he began leading expeditions to climb the highest mountains in the world. After settling in Colorado, Pemba opened a restaurant in Boulder where he began serving his family’s recipe for traditional chai tea. Overwhelming demand has lead to the development of Sherpa Chai which is marketed worldwide. Pemba’s success has enabled him to build a bridge across the treacherous Dhud Koshi, providing a safe passage for thousands in his home village, and cutting the commute for school children from 3 hours to only 30 minutes. 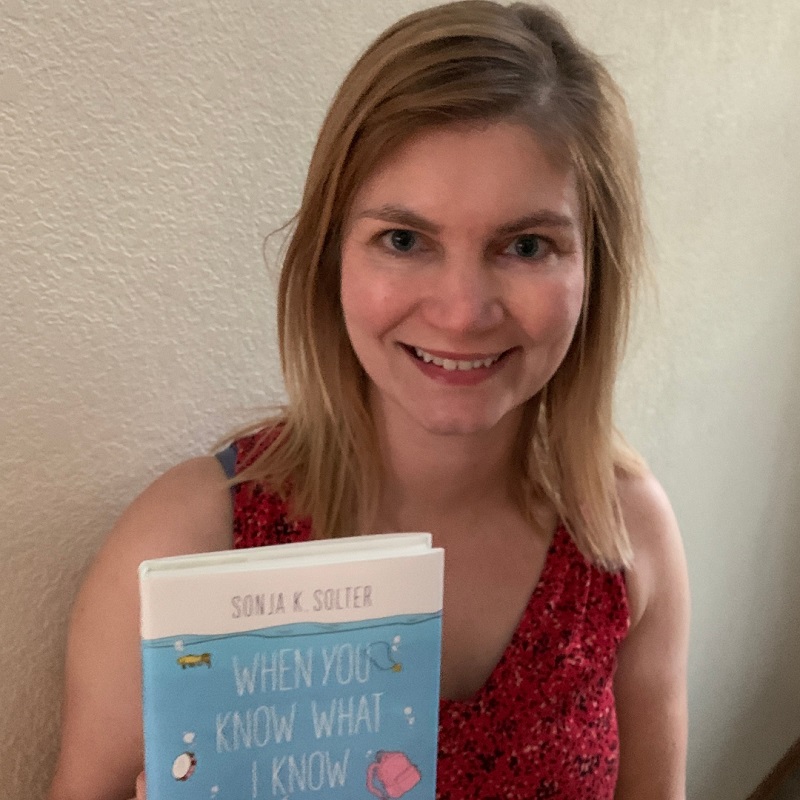 Sonja K. Solter developed a voracious love of reading as a child. She enjoys writing poetry and prose for children of all ages. She has an MFA in Writing for Children and Young Adults, and her master’s critical thesis was on writing trauma in middle grade and young adult realistic fiction. She is currently a creative writing mentor to youth and Drafting Workshop Lead for the Society of Young Inklings and Sonja lives in Louisville, Colorado. 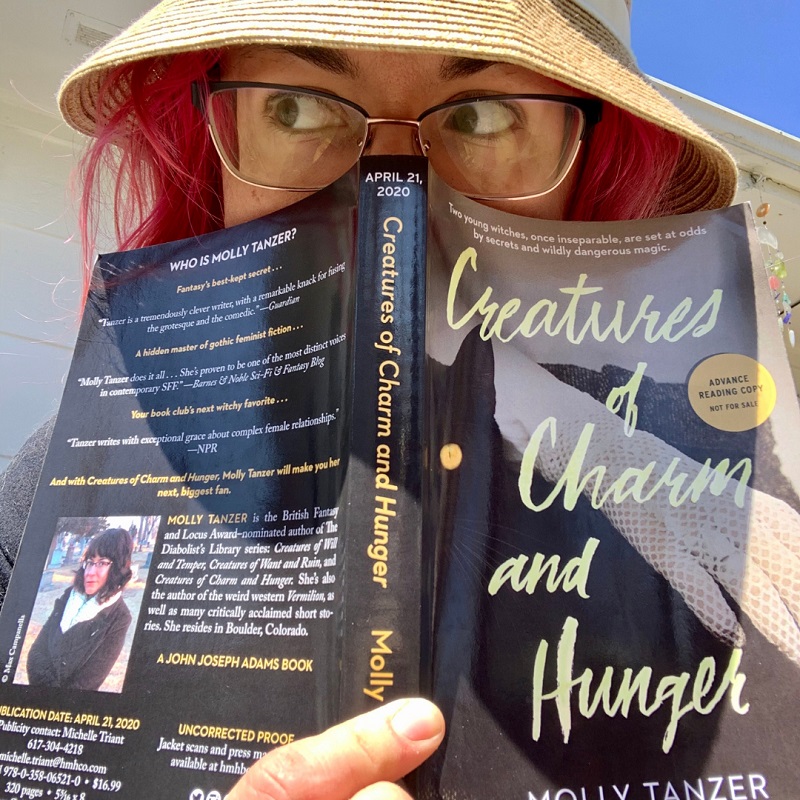 For Molly Tanzer, writing is her refuge, obsession, passion – her life. She is the author of the Diabolist’s Library trilogy, the weird western Vermilion, an io9 and NPR “Best Book” of 2015, and the British Fantasy Award-nominated collection, A Pretty Mouth. Her critically acclaimed short fiction has appeared in The Magazine of Fantasy and Science Fiction, Lightspeed, and Transcendent: The Year’s Best Trans and Nonbinary Speculative Fiction, and elsewhere. She lives outside of Boulder, CO. 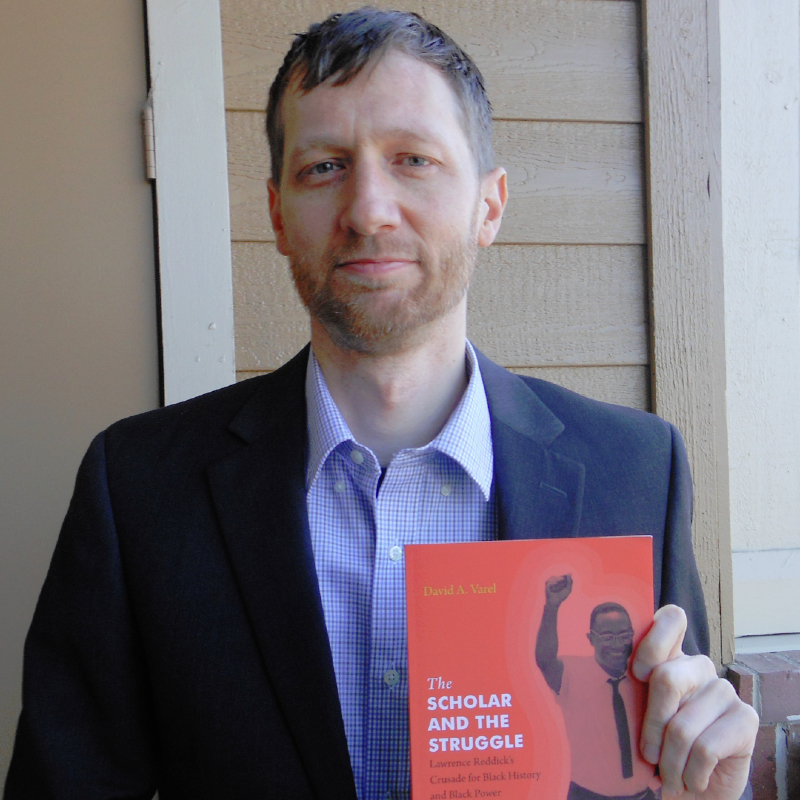 David A. Varel is a historian of the modern United States who specializes in intellectual history, African American history, the history of race and class, and the civil rights movement. His research examines the social construction of race, paying special attention to the role of black intellectuals in combating scientific racism during the first half of the 20th century. David is an affiliate faculty member of history at Metropolitan State University of Denver. He earned his PhD from the University of Colorado Boulder.

Nancy Walker took care of her mother during the last ten years of her life. She found the commonsense approach extremely helpful during this challenging time. Her diverse background as a professional working for small businesses and global corporations taught her to be flexible while managing change, both of which were essential during those caregiving years. A lifelong learner, Nancy is also a certified Emergenetics Associate. She’s a Colorado native, a theater enthusiast, and an avid reader.