Hammering Out Human Rights: Eleanor Roosevelt at the United Nations 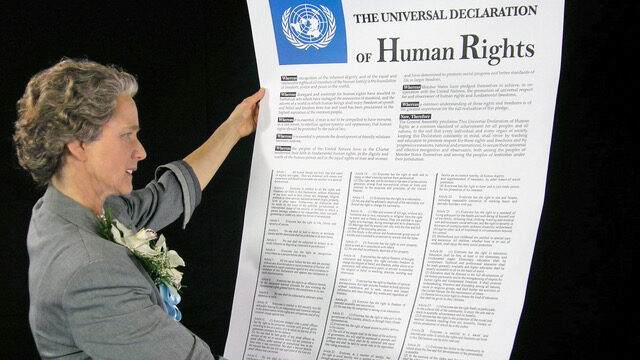 Hammering Out Human Rights: Eleanor Roosevelt at the United Nations

Presented in Partnership with the Jefferson Humanists

Dubbed “First Lady of the World” by President Truman, Eleanor Roosevelt speaks of the ground-breaking, grueling, tempestuous, and eventually triumphant development of the Universal Declaration of Human Rights, a Magna Carta for humankind. Along the way, we gain insights to what brought Mrs. Roosevelt to be at the United Nations in the first place and the fears that are currently (in 1950) stoking animosities between the Soviet Union and the United States. You may be surprised to find out why Human Rights are important to your future and to the strength of the country.

The program includes glimpses behind Mrs. Roosevelt’s public life into the story of the little girl who lost both parents before the age of ten, a debutante who felt trapped by society’s expectations, and a young wife who raised five children before emerging as one of the 20th century’s most remarkable women.

Programs include an in-character presentation, a Q&A with “Eleanor Roosvelt” and a Q&A with the presenter. More information can be found here.