Barbecue in America
An evening with Smokelore author Jim Auchmutey 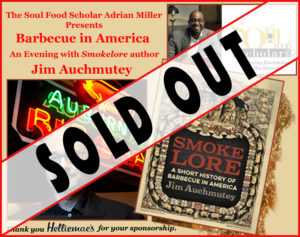 Enjoy a delicious barbecue buffet while the two authors talk about Jim Auchmutey’s experiences as writer, Smokelore, and, of course, BBQ!

Ticket price includes a buffet dinner provided by  Rolling Smoke BBQ.
(Beverages, available from Cheluna, are not included in the ticket price.)

With Smokelore, Jim Auchmutey marvelously guides us through the fascinating, wonderous world of American barbecue – its colorful past, its vibrant presence, and glimpses of its global future. He is a skillful storyteller who does much to sort out fact from fiction about what we now know about barbecue. Smokelore is essential reading for anyone seeking a comprehensive, well-illustrated, and enjoyable look at barbecue culture in the United States.

According to Smokelore publisher University Press, the story of barbecue encompasses every region and demographic group in the United States, and touches almost every aspect of our history, including indigenous culture, the colonial era, slavery, the Civil War, the settling of the West, the coming of immigrants, the Great Migration, the rise of the automobile, and the expansion of suburbia. The author follows the delicious and contentious history of barbecue in America from the ox roast that celebrated the groundbreaking for the U.S. Capitol building to the first barbecue launched into space almost two hundred years later. The narrative covers the golden age of political barbecues, the evolution of the barbecue restaurant, the development of backyard cooking, and the recent rediscovery of traditional barbecue craft.

Jim Auchmutey, a reporter and editor for the Atlanta Journal-Constitution for 29 years, twice won the Cox Newspaper chain’s Writer of the Year award. He is a founding member of the Southern Foodways Alliance, and served as guest curator for the Atlanta History Center’s Barbecue Nation exhibit. He has been honored by the James Beard Foundation, the Association of Food Journalists, and the Society of Professional Journalists. He is coauthor of The Ultimate Barbecue Sauce Cookbook, and author of The Class of ’65: A Student, a Divided Town, and the Long Road to Forgiveness. He lives in Georgia.

Event host Adrian Miller is an attorney, former White House staffer, James Beard Award-winning food writer, certified barbecue judge, Colorado Humanities board member, and executive director of the Colorado Council of Churches. He wrote Soul Food: The Surprising Story of an American Cuisine, One Plate at a Time, which was published by the University of North Carolina Press in August 2013, and won the 2014 James Beard Foundation Book Award for Reference and Scholarship. His second book, The President’s Kitchen Cabinet: The Story of the African Americans Who Have Fed Our First Families, from the Washingtons to the Obamas (2017), was a 2018 NAACP Image Award Finalist for Outstanding Literary Work—Nonfiction. Adrian is currently writing a history of African American barbecue culture tentatively titled Black Smoke.

for supporting this event.